A biofilm is defined as a community of bacteria enclosed in a self-produced exopolysaccharide matrix that adheres to a biotic or abiotic surface.

To break it down, a biofilm (of bacteria, for example) forms when a microorganism is allowed to hang around and stick to some object in a wet environment, then starts to reproduce. They form and grow in moist, wet environments and can be very dangerous in your water system.

Because of the biofilms’ complex architecture, stabilized by its attached mechanisms and ability to adapt to the environmental conditions, they are very difficult to re-move.

“The reason that biofilm formation is a great cause of concern is that, within a biofilm, bacteria are more resistant to antibiotics and other major disinfectants that you could use to control them,” said A.C. Matin, a professor of microbiology and immunology at Stanford University.

Where can they be found and how are they formed?

Biofilm forms when bacteria adhere to surfaces by excreting a slimy, glue-like substance.

Wherever you find a combination of moisture, nutrients and a surface, you are likely to find biofilm. They can adapt perfectly to the environmental conditions, making the disinfection process a difficult task.

A biofilm develops in five phases: 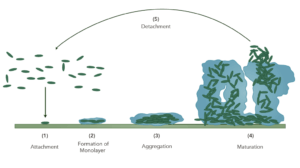 As with the case of Legionella bacteria, Biofilm’s form in your water supply where the water flow is low or has significantly reduced, for example after a shutdown or periods of very low water use, or following repairs and maintenance.

In a new water system or a well-maintained water system, unfortunately they can still form, either by product of poor design or poor installation.

Problems they cause and problems removing them

These resistant groups of microorganisms cause contamination to the water and subsequently to the final product, which can lead to the alteration of the product, food poisoning out-breaks or other negative effects on the customers.

One of the main issues with Biofilms is due to the fact they can enter a “Viable But Non-Culturable” (VBNC) state – where under stress conditions the bacteria essentially “hibernate”.

When they are in this state, their metabolic activity is greatly reduced and while the bacteria doesn’t divide they are alive and have the ability to become culturable once resuscitated.

This state can be thought of as an inactive form of life waiting for revival under suitable conditions, and while in this state they are non-detectable by conventional food and water testing methods – offering a false sense of security believing there are no biofilms in their water.

The main problems caused by Biofilms include:

Clogging of conduits and pipes, reduced efficiency of heating and cooling devices, as well as corrosion and deterioration of surfaces. This is because sulfate-reducing or acid-producing bacteria often live inside biofilms.

In the health environment they favour the development of chronic infections. Infections also occur as a consequence of surface-person (catheters, prostheses, etc.) or surface-product-person (Industry) cross contamination.

A safety alert on a food, cosmetic or medicine can entail significant economic losses due to the withdrawal of the product from the market, production stoppage and verification of the facilities until disinfection.

The first of the difficulties to eliminate biofilms is to detect them, so control strategies are essential.

Let’s remember the VBNC effect – Bacteria that do not reproduce, that are metabolically alive and can re-infect, but that are not detected by culture-based screening methods.

Over estimation of the biocidal capacity of the disinfectants used.

As mentioned, inside biofilms, microorganisms are protected and metabolically mutate, becoming more resistant to some disinfectants. For example, 70-day treatment cycles with 0.2 mg / L Chlorine Dioxide ClO₂ (the maximum allowable dose for drinking water treatment) have been repeatedly shown to result in a significant reduction in microorganisms, but not destroy all microorganisms, (cf. Otte et al., 2004; Lenz, 2011)

For example: when applying water under pressure on a biofilm, microorganisms can break down in the aerosols formed by the water and settle on other surfaces.

Why Sanosil is so effective

The catalase produced by the biofilm leads to the release of oxygen that begins its oxidizing effect.

The fine bubbles with the oxygen molecules produced literally tear the biofilms protective barrier and it falls apart, allowing the hydrogen peroxide to penetrate deeper into the structure.

The biofilm quickly detaches from the substrate and breaks down.

Once the biofilm structure has been broken, individual microorganisms are practically defenceless against the dual phase effect of the disinfectant.

While cell walls are broken down by oxidation, silver blocks the ability of microorganisms to reproduce and obtain energy. This results in excellent removal rates and long-term efficacy. 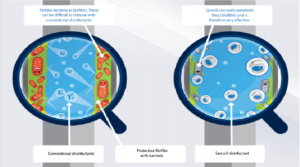 All water distribution systems eventually develop some type of biofilm. Because biofilms can protect pathogenic (disease-causing) microbes from disinfection, they can present a threat to public health.

Due to the fact the Biofilm itself can adapt to its’ current environment and enter a VBNC state, along with its protective barrier – Unfortunately, Biofilms are not only hard to detect but hard to kill.

It is important to stay on top the maintenance of your water systems so that these pesky bacteria can be identified early, and action can be taken.

For further advise get in touch with us today.

We make the invisible, visible

The Importance of Water Tank Cleaning
Scroll to top