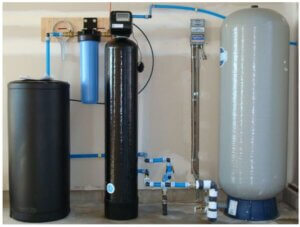 Water softener is required for the majority if water treatment plans, and when using water softener you also require a brine tank full of salt. But what is this for and why is it needed? Let’s find out.

One of the most common ways to soften hard water is through the use of salt. Most people and water treatment companies will use an ion-exchange water softener, where salt plays a critical role in the functionality of these water softening systems.

Ion Exchange is the process of replacing a molecule of lesser charge for a charged molecule. The ion exchange uses salt ions to replace calcium and magnesium in the water supply.

Lets break it down. 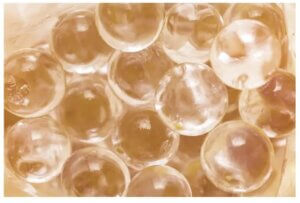 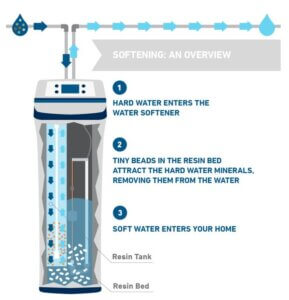 Essentially, calcium and magnesium ions are captured by the media inside and removed from the water before it travels to the rest of your system.

2. This ion exchange results in soft water that enters your facility.

Now we are left with the hard minerals which were in the water, it needs to be recharged, and that’s when the softener salts go to work.

3. To regenerate the system the resin tank is flushed with salt water from the brine tank.

The salt mixes with water to create a brine solution, this solution flows through the resin, contacting the resin beads loaded with calcium and magnesium ions.

The sodium in the brine solution has a positive charge, and breaks away to the negatively charged resin. When that happens, the calcium and magnesium molecules get kicked off the resin until all exchange sites are taken up by sodium ions.

4. The minerals and brine solution are then flushed from the system and down the drain, and the system is ready to begin the softening water treatment again. 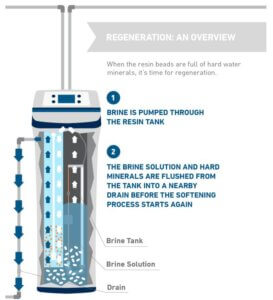 To clarify water softeners do not add any salt to the water; the water softening process breaks down the salt to use its sodium only.

How Much Sodium is in Your Water?

The amount of sodium in softened water depends on how hard the water is to begin with. The ion exchange process is just that, an exchange, the harder the water, the more sodium is required to remove the calcium and magnesium.

Salt is critical for water softening systems that use ion-exchange, these systems remove the minerals in hard water and replace them with sodium ions.

It all comes down to chemistry; that’s where our experts come in! contact or team to day to talk about all of your water softener needs.