An industrial steam boiler is used to produce steam from water for power generation, and preventing the damaging build-up of scale is crucial to maintaining the effectiveness of a boiler.

The formation of scale on boiler tubes is one of the main issues experienced with steam boilers, this is due to improper calcium levels within the feedwater system supplying the boiler.

The impact of scale inside a steam boiler is very significant, and if left unchecked, scaling can negatively impact your boiler’s efficiency and damage the boiler tubes inside your boiler’s pressure vessel. Even if it is only a couple millimeters thick it will cause uneven heating, increased operational costs and potentially result in boiler failure.

In the light of boiler performance, boiler safety and boiler reliability it is essential everything is done to prevent the build up of scale. 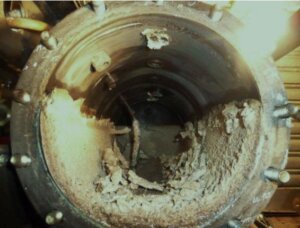 What exactly is scale?

Boiler scale is caused by impurities being precipitated out of the water directly on heat transfer surfaces, with the evaporation in the boiler causing impurities to concentrate.

The presence of calcium and magnesium salts is the main cause of scaling in boilers, along with high concentration of silica to the water alkalinity in the boiler.

Steam boilers rely on heat transfer from the fireside, through the metal tubes, to heat the water and generate steam but when the scale accumulates in the boiler tube it prevents heat from passing through and acts more as an insulator, impacting the required energy inputs and steam outputs.

Scale build up of even 4mm can reduce efficiency by up to 20-25% due to lost heat transfer.

How does scale effect the steam boiler?

Due to the nature of its operation, it is nearly impossible to prevent the build up of scale in the stem boiler, but everything should be done to ensure the build up is kept to a minimum.

As mentioned above, even then the smallest amount of build up ca have serious ramifications on your boiler:

The first and most important step towards preventing scale build up, is to make sure the make up feed water is good quality demineralised water. The purer the water is the better chance you have that the scale build up will be minimal.

There also should be a water treatment plan in place, this will help control the following which in turn helps prevent scale build up: 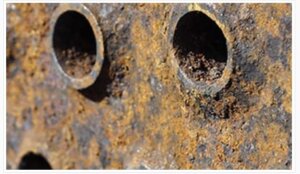 Scale is formed by salts (calcium, magnesium) that have limited solubility but are not totally insoluble in boiler water, these salts reach the deposit site in a soluble form and precipitate.

While it is extremely difficult to stop the build up of scale completely a lot can be done to ensure the build up within the pipe is minimal.

If you think you are having issues with scale build up in your boiler get in touch with us today to see how we can help.

What Sanosil product do you need?