Cooling towers and steam boilers are both essential pieces of equipment in the industry. While they both carry out different purposes, they do share a major water related problem: corrosion.

Corrosion can be defined as the destruction of a metal by chemical or electrochemical reaction with its environment.

In water treatment, corrosion is a major cause for concern. In many cases, corrosion can be predicted, managed or prevented entirely by the selection of correct materials, conditions and careful monitoring, however if it is not controlled, corrosion can lead to poor energy transfer in heat exchangers, the creation of favourable microbiological conditions in cooling towers, and complete failures in steam boilers.

As steam is generated by a boiler or water evaporating from a cooling tower, dissolved minerals are left behind, which increases the concentration of minerals. Additional minerals are then introduced via the water added to makeup the water lost due to steam or evaporation. Eventually, the minerals reach a level of concentration that will cause either loss of efficiency due to scale or damage from corrosion.

It is vital that the utility feed water is treated correctly in both instances to prevent corrosion and ensure the equipment is running efficiency to maximise boiler and system life, reduce maintenance costs and maintain required levels of operational performance.

The first is the failure of equipment with the resultant cost of replacement and plant downtime. The second is decreased plant efficiency due to loss of heat transfer (the result of heat exchanger fouling caused by the accumulation of corrosion products).

Corrosion occurs when contaminants in the water, mainly gasses like oxygen and carbon dioxide, cause the metal to degrade and return to its oxide state by means of an electrical or electrochemical reaction, this results in areas of the metal thinning and increases chances of rupture.

Different types of corrosion commonly seen in cooling towers include:

Solutions for treating corrosion in cooling towers include filtration, building the system with corrosion-resistant materials (such as stainless-steel piping), and using chemical controls such as corrosion inhibitors and biocides.

In the case of steam boilers, corrosion is the degradation of boiler material where the corrosion is caused by an electrochemical reaction.

This is primarily due to the reaction of oxygen present in boiler water, where the oxygen that is dissolved in the water inside the boiler, reacts with the metal of the steam boilers and causes the boiler steel to deteriorate into iron compounds. Water molecules go into the vapor phase at higher temperatures resulting in more water vapor in the air. It is responsible for the pitting in the tubes as well as the pre-boiler section.

Corrosion may also occur as a result of low pH boiler water, the acidity of water is usually as a result of the dissolved gasses. The acidic water corrodes the internal surfaces of the boiler and leads to the pitting of boiler metal.

The problems encountered in these plants can be severe if scale formation and corrosion occur,  ranging from loss of efficiency and reduction of plant life to, at worst, catastrophic failure. 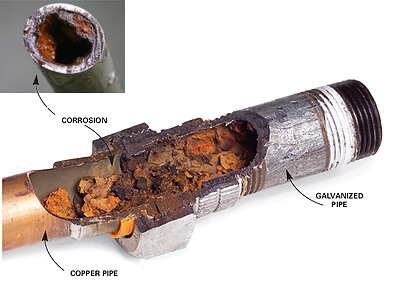 What can be done to help prevent corrosion?

Both external and internal treatment of the boiler water is required for optimal operation, Inhibitors generally are used to control corrosion on the inside of pipelines. The specific inhibitor depends on the material to be protected and the solutions transported inside the pipe. An effective internal boiler treatment programme involves the addition of chemicals to the feed water, boiler water and steam, in order to react with traces of undesirable elements which can remain after external treatment.

Additives, including certain chemicals, can ensure that the oxygen which makes its way into the system via the feedwater is rapidly absorbed. These additives can remove the oxygen before it has the chance to form corrosive cells.

Use a boiler logbook

Keep track of the normal operation of your boiler room equipment, this will make it easier to spot where there are any drastic changes in your system. Regular checks will alert you of any temperature and PH changes before it becomes are serious corrosion problem.

This should be carried out by a professional organisation to ensure the boiler or cooling tower stays clean and free of scale and corrosion problems. It will allow you to catch problems early before they turn into costly repairs. 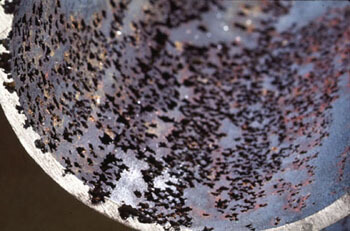 Maintaining system water for plant processes is vital to ensure effective operations. Many cooling towers and boilers have inline controllers to release water from the tower or boiler and feed chemical(s) into the system.

The problem many companies have is that to conserve water and treatment chemicals, they have to allow the dissolved minerals reach a maximum cycle of concentration while still avoiding problems; like corrosion, that’s why it is important professionals carry out a water treatment plan for your systems.

As outlined, corrosion in the steam boiler or cooling tower can have serious ramifications, not only for the equipment but for your company aswell. For this reason your water systems must be maintained.

AquaChem have an experienced team of water specialists who can help you – feel free to contact us for any advise on your water treatment.

Why is water so important?
Scroll to top