Aside from evaporating, water is also cooled by sensible heat transfer due to the temperature difference between air and water.

Cooling towers vary in size and design, from large structures which are usually used in industries like power plants, refineries and various manufacturing facilities and smaller ones on the rooftops of shopping centres, hospitals or universities.

The type of cooling tower is based on 2 main things:

In this blog we will take a closer look at the different types of cooling towers that are used in industry.

Cooling towers can be classified either by 1. build, 2. heat transfer methods and 3. airflow generation methods, we take a look at each below:

Package type cooling towers are pre-fabricated and so can be easily transported to your facility.

The shell is usually made of corrosion-free, heat resistant and durable material like fiberglass-reinforced polyester.

This type of cooling tower is preferred in facilities with low heat rejection requirements like hospitals, malls, and office buildings.

These are large units that are generally used in power manufacturing facilities such as steel processing plants or oil refineries. They are large structures compared to the package type and are manufactured according to custom specifications

There are two methods of how heat is removed from the water: loss through evaporative cooling and cooling through sensible heat transfer. Heat transfer in a cooling tower is either by conduction, convection or a combination of both.

Classification by heat transfer methods differentiates cooling towers on how these principles are applied.

Dry cooling towers operate by transferring heat through a surface that separates the working fluid from ambient air.

Hot air passes through finned tubes or coils exposed to ambient air, the heat is mainly removed by sensible heat transfer. The fan is driven by an electric motor and so, dry cooling towers don’t consume any water. 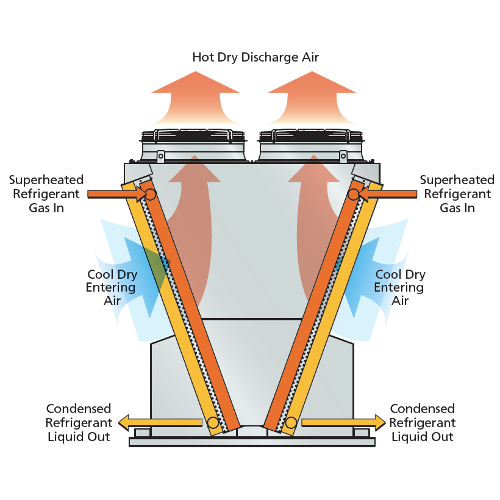 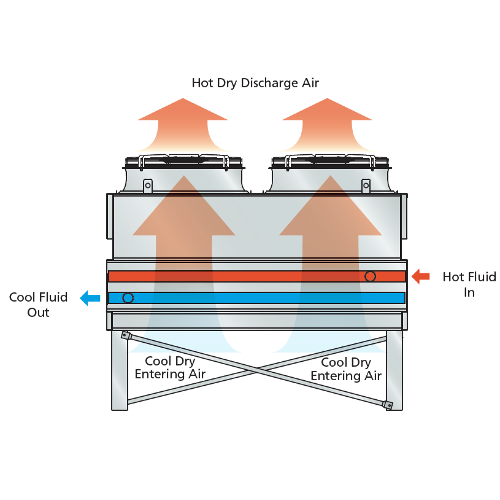 These are the most popular cooling towers because they are cost-effective and renewable.

Wet cooling towers operate mainly by the principle of evaporative cooling, although some heat is also removed through sensible heat transfer.

Wet cooling towers typically produce drift emissions, although they are not hazardous to the environment, multiple drift eliminators are used to minimize the cooling tower drift. 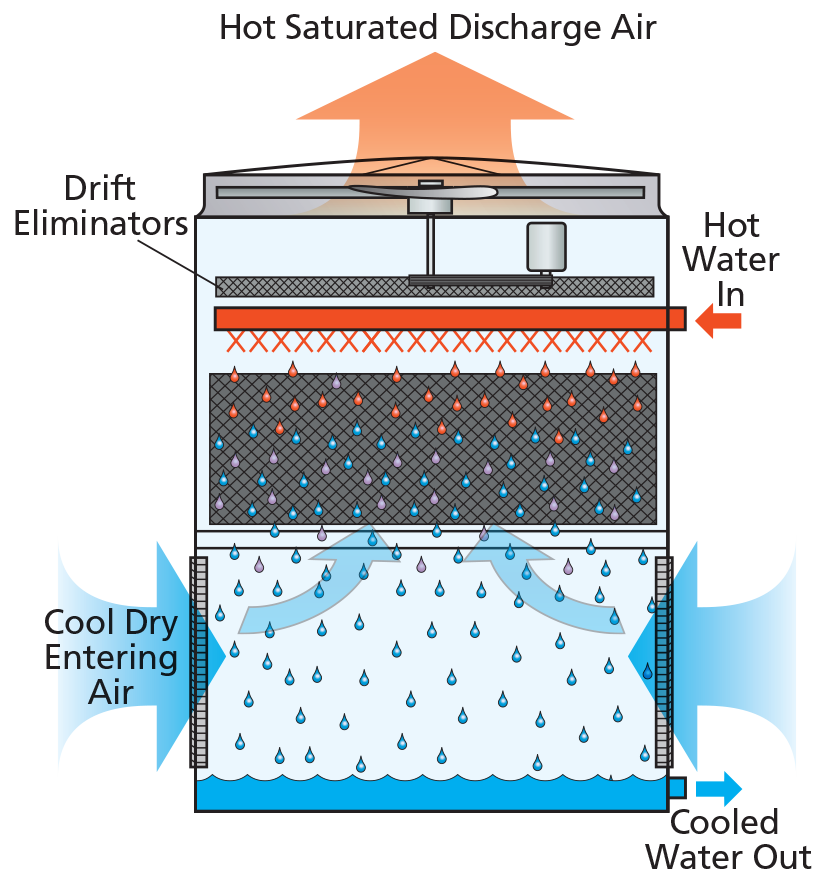 In closed circuit cooling towers, often water is mixed with glycol to form a fluid.

The returning hot water from consumers passes through tubes or coils where sensible heat transfer happens. Outside of these tubes, water is sprayed similar to wet cooling towers. Both latent and sensible heat are removed to the sprayed water by coming into contact with the air stream.

Their advantage is that there is no scale formation and hence makes for better productivity and lesser downtime. 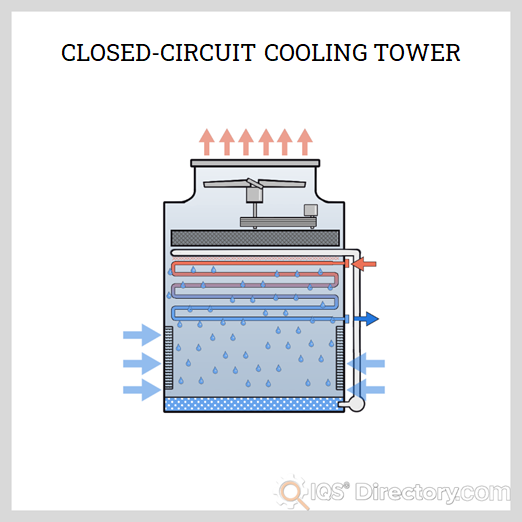 The evaporation of water in a wet-mechanical draft is more energy efficient when compared to the other types of cooling towers like dry or fluid.

Cooling towers vary on how air flow is introduced in the system, this can be by natural, mechanical, cross flow or counter flow towers:

As their name implies, natural draft cooling towers rely on natural convection to circulate air throughout the tower, with no mechanical drivers to create the air flow.

They use the design and shape of the tower to move up the air naturally and takes advantage of the difference in ambient air densities below and above the tower.

Air movement occurs due to differences in density between the entering air and the internal air within the tower. Warm, moist air, which is more dense than cool air, will naturally rise through the tower, while the dry, cool air from outside will fall, creating a constant cycle of airflow.

These towers can only be installed outdoors and have a lower reliability than others as they are affected by wind and temperature changes.

Mechanical Draft towers tend to use a fan to circulate air inside the tower, common fans used include propeller or centrifugal fans.

These types of cooling tower are much smaller than natural draft tower and so can be located anywhere inside the building. Capacity control is easy in these types of towers as the speed of the fan can be controlled.

As the name suggests, this type of cooling tower uses fans or blowers to force air into the cooling tower. Air flow has high entrance velocity as it is being forced by the blower, as it passes through the tower, air flow slows down. Forced draft cooling towers are used in indoor applications where high static pressure is a concern.

These have their fans located at the top that draws (or induces) air from the air intake louvers at the bottom or sides of the tower. Differing to forced draft cooling towers, this arrangement has low entrance and high exit velocity which results in reduced recirculation. These types of cooling towers are widely used in industrial plants requiring stable performance.

The towers can also be classified as cross-flow and counter-flow cooling towers. Their difference is the method on how water comes into contact with the air stream. 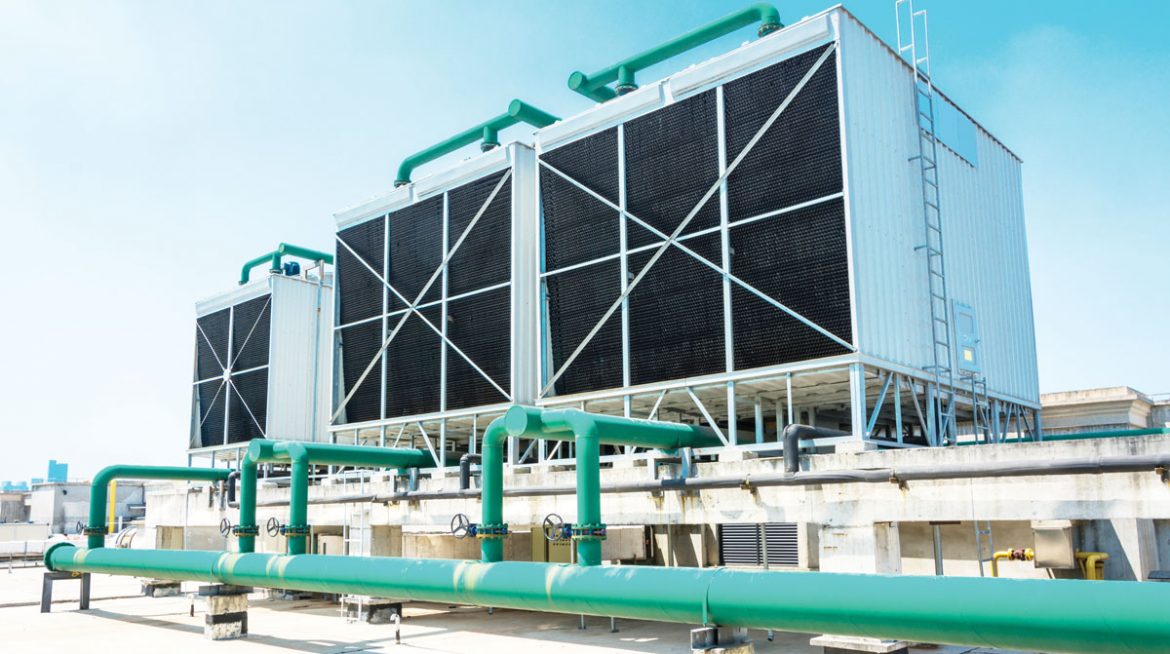 In a crossflow tower, air flows horizontally through the cooling tower’s structure while hot water flows vertically from distribution basins. They use a splash fill which allows the in-flowing to air move horizontally over the stream of water from the upper reservoirs.

A distribution basin distributes the hot water to evenly fall into the fill by gravity through nozzles or orifices, the action of gravity eliminates the need for a pressurized-spray system. Since the airflow contact time is lesser in this type, more air is required for heat transfer to occur.

Crossflow systems are some of the more expensive equipment types, but they are also some of the easiest to maintain. However, these cooling systems are more vulnerable to frost than others.

In this type of cooling tower, air flows parallel but opposite to the fall of water.

Counterflow towers move air upward through the tower while water flows downward to cool the air. The distribution is done through channel with lateral pipes, fitted with splash spray nozzles.

The need for this pressurised system puts counter-flow cooling towers at a disadvantage, however they are often more compact in than crossflow towers and can save energy in the long run.

Cooling towers are specialized heat exchangers, but instead of the usual conduction – convection heat transfer, it generates cooling by bringing water and air into contact.

There are different types of cooling towers depending on its air flow generation, air-to-water flow, heat transfer method and construction, each of these types has its own set of advantages and disadvantages.

The routine maintenance of the cooling towers is very important to maximize their utilization. Since cooling towers consume energy, there are multiple ways you can ensure that they are energy efficient.

You can speak to any of our experts today for some more information and advice.