As most people know, most common metals are subject to corrosion where the rate of corrosion and risk of failure depends on a number of factors including the microbiological environment, temperature, flow rate and the thickness of the metal.

However, underfloor heating systems are also susceptible to corrosion. They are one of the more overlooked systems which are susceptible, especially older systems which were installed using plastic pipes. We recently discovered one of our sites that had these old-style plastic pipes installed was having trouble with their system and it was exactly this which was the problem.

How the problem occurs

It has only been realised in the last few years that the plastic pipes in early underfloor heating systems can be the source of issues in LPHW.

These pipes are permeable to oxygen, while the pipes don’t let water out, they can’t stop oxygen getting in and gases escaping. Whereas with metal pipes when the heating cools down, metal pipes won’t let gases escape or oxygen in.

Water is the perfect heat transfer medium for building services, it has a high specific heat, it is liquid over a convenient temperature range, non-flammable, non-toxic and freely available. The downside is that water is an electrolyte that facilitates corrosion in metallic pipework and components.

The obvious solution might be to use plastic pipework but this can actually increase the risk of corrosion of the corrodible components that remain.

Technology has since advanced to the point where it is now possible to produce underfloor heating pipes that are practically diffusion proof. Valves, threaded joints, circulating pumps, regulators, automatic bleed devices and faulty expansion tanks, however, are still potentially important sources of

How do you know when there is a problem?

There are a number of signs that will appear in your water systems to indicate that there is an issue, these include; 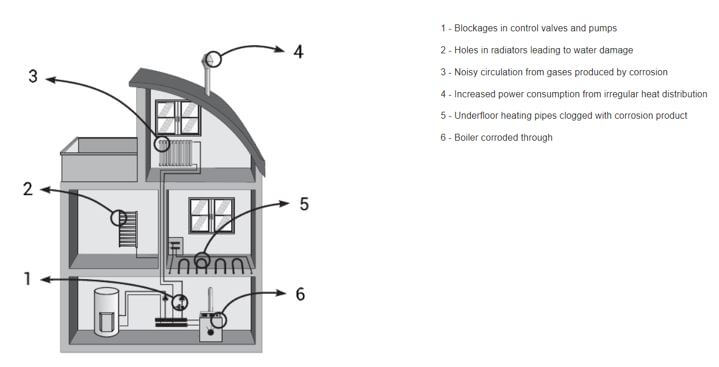 Water treatment chemicals work by inhibiting the corrosion process, either by coating the surface of the metal (anodic inhibitors) or otherwise blocking the corrosion reactions (cathodic inhibitors). However, inhibitors are not the solution to poor closed system design or operational deficiencies and certainly won’t work to best effect in a dirty system i.e. one with a high level of suspended solids and/or biological contamination.

Please don’t hesitate to contact us if you think you have a problem with your under flooring heating or if you want to find out how we can help solve any problems you have.